The sun turns a bright ball of orange as it dips beneath the Kogatende hills. The sky transforms into a dramatic landscape of sunset colors and the first chorus of the African night begins to chime. Wildebeest and Zebra grunt as they migrate upriver to find a safe place for the night. The great migration has arrived in Northern Serengeti. The herds have embarked on a 4-month pilgrimage north, through Serengeti National Park, following the rain and green pastures.

In symbiosis with the wild, arriving in Kogatende at the end of June with the first herds we first welcomed the Siringit Migration Camp. After seven months of stitching, welding, recycling, remaking, carving, refining details and design, the Bedouin-style luxury mobile camp made the three-day journey from Arusha to Northern Serengeti. Siringit Migration Camp has taken a month to assemble and build.

Why is Siringit Migration Camp magnificent?

Siringit Migration Camp has been designed and made in Tanzania by Eco.tz using locally sourced and recycled materials. The mobile camp is a sustainable mobile camp, protecting the environment, limiting its carbon footprint, supporting local enterprise and employment. For the first time in Tanzania, you will be able to enjoy the comfort of 5-star luxury in the mobile tented experience. The luxury tented camp will move in migration with the wildlife to give you a marvelous safari home in the remote wilderness of Serengeti National Park.

Where is Siringit Migration Camp located and when does it open?

Siringit Migration Camp will be opening in Kogatende to welcome its first guests on 6th August. The elegant mobile camp will remain in Northern Serengeti until 15th November. The luxury tented camp is designed to move with the wildlife migrations from the magnificent crossings in the north to the calving season in the south. Siringit Migration Camp will be opening in Ndutu, Southern Serengeti, on 15th December and it will remain in the south until 31st March when the herds start their pilgrimage north again.

How do we get to Siringit Migration Camp?

Kogatende airstrip in only 5km from the Siringit Migration Camp. It is a short 10-minute game drive direct to the camp from the airstrip. There are daily scheduled flights from Arusha or Seronera to Kogatende in Northern Serengeti.

It is a magnificent game drive from Siringit Serengeti Camp in Seronera to Siringit Migration Camp in Northern Serengeti. The dirt road leads through Lobo which is populated with huge Elephant herds, Cheetah, Lion prides and Buffalo. The drive is an African adventure filled with wildlife surprises.

How many tents does Siringit Migration Camp have?

Eight luxury tents overlook the vast expanse of the Serengeti wilderness. The Mara region ecosystem is teeming with spectacular wildlife and surrounded by vast open spaces, breathtaking landscape. The camp blends effortlessly into its environment. The hexagonal-shaped shade net dips elegantly to the earth as if bowing gracefully to her majesty. The transparent tents dissolve the boundaries between man and nature, bringing you closer to nature.

Is there a family tent?

Two luxury tents are positioned side by side to create an elegant family home in the Serengeti wilderness. Each tent can accommodate double beds, twin beds, or be transformed into one double room and one twin or triple room depending on the size of your family.

When we go out on game drives, what can we expect to see?

Game drives in Northern Serengeti are magnificent. It is advisable to rise with the sun. The sun rises to the east of the camp and golden light streams into each tent blessing the day with its warmth. Wildlife is most active in the golden hours of the morning and the evening,

The Kopjes near the camp are home to resident Leopard and Lion prides. The Lions tend to be returning home in the morning after a night on the prowl. Thousands of Wildebeest and Zebra start walking along wildlife trails, across the plains, to the river in search of a safe crossing point. Little do they know that there may be a pride of Lion hidden under the dark green foliage of the trees on the other side of the Mara River.

On the Gardenia plains, a Cheetah stalks a Gazelle, the ochre grasslands dancing elegantly in the mid-morning light. Her lean body, designed for speed and agility, is a marvel of anatomy. She lifts her head to the wind and then bolts suddenly up the hill. The wind bringing the scent of the Lion pride in the valley below.

Nature always surprises on safari in Northern Serengeti. Whilst waiting patiently for the Wildebeest to cross, a herd of Elephant meanders down to Mara River and decides to brave the murky waters, crossing to the other side. The Wildebeest have moved from one crossing point to the next and back again. Finally, a few brave beasts take the leap into the crocodile-infested waters and the herd follows in a stampede across the river.

The turned heads of Zebra snorting in alarm signal a predator on the prowl. As the sun begins to soften a Leopard, beautifully lit by the golden evening light, saunters onto a rocky Kopje. She is surveying her territory for an unsuspecting Impala or Gazelle.

What other activities can we enjoy at Siringit Migration Camp?

Balloon safaris offer a unique view of the Serengeti National Park. The balloon rises with the sun and drifts up the Mara River meandering with the migration trails, over thousands of Wildebeest congregating on its banks. The cool morning air is a refreshing awakening for the day ahead on safari.

When our guests rise with the sun to go out on game drives there is not much time for breakfast. During the crossing season, between July and November, and the calving season, between January and March, there is often not enough time to return to camp for lunch either. Our chefs, trained by Axel Janssens, accommodate your need for safari dining in the wild. It is possible to order a delicious packed breakfast and lunch to be enjoyed under the shade of an iconic Acacia tree on the plains surrounded by the migration.

Can we arrange our PCR tests in Kogatende and Ndutu?

Covid PCR tests will be arranged by Siringit Migration Camp manager. It is possible to do the tests at the Kogatende airstrip and in Ndutu before your departure. Test certificates will be sent to you in time for your departure home.

Siringit Migration Camp is one of the first mobile camps to combine 5-star luxury with the mobile camping experience. In style with Siringit signature, the luxury mobile camp strikes a balance between aesthetic elegance and functional safari lifestyle. The Bedouin-style tents open to the endless landscapes of Serengeti National park, bringing you closer to nature.

How many days should we stay to see incredible wildlife?

The more time you spend at Siringit Migration Camp the more wildlife you will see. It is advisable to spend at least 3 nights in our migration camp. We have designed a special opening offer to give you more time on safari. When you spend 3 nights at Siringit Migration Camp we will gift an additional night free extending your stay to 4 nights. This will ensure that you have time to enjoy our camp and the amazing wildlife of the Serengeti National Park.

Siringit Migration Camp is part of a collection of boutique homes. Siringit Collection is a family of intimate, private safari homes prioritizing memorable travel experiences in remote wilderness locations in Tanzania. Serengeti National Park is a fabulous destination for bird watching, wildlife and wildlife photography. As a family, Siringit Collection caters for family travel with safari activities designed to fascinate and captivate the wild imaginations of children on safari. 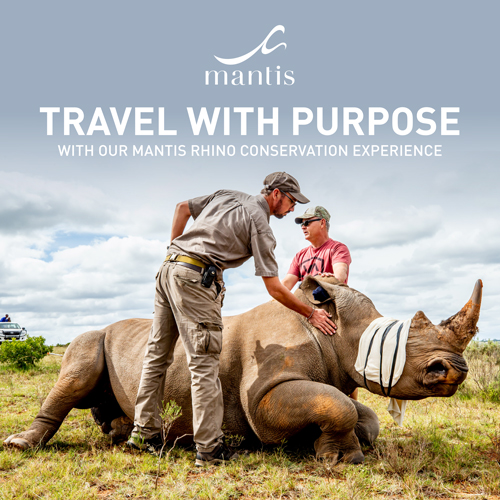 Travel with purpose and be part of a conservation legacy.

Focused on ecotourism and sustainable travel, Mantis offers immersive opportunities for our guests to make a real and lasting impact for wildlife and communities.